Deep Vein Thrombosis is a condition in which blood clots form in the deep veins of the leg. This may lead to swelling of the leg and is hazardous to life because bits of clot in the leg may fall off and travel via the main veins to the heart. Here they pass through without a problem but become stuck in the arteries to the lungs. This is called a 'pulmonary embolism'. This condition causes shortness of breath, collapse and chest pain. Left untreated this may lead to death.

Deep vein thrombosis occurs in about 1 person per thousand per year. It may cause no symptom but more often leads to pain and swelling in the calf. If the clots spread to the thigh or to the groin both the thigh and calf become very swollen.

DVT occurs as a result of both inherited and environmental factors. There is a number of inherited conditions that cause DVT. Patients with this problem somethimes know of other family members who have also suffered a DVT. Injuries to the leg, especially fractures, may cause a DVT. Orthopaedic surgeons who look after patients with fractures look out for leg sweling after a fracture in case a DVT has begun. In fact, any treatment in hospital can lead to deep vein thrombosis. Operations on the leg such as hip or knee replacement can cause a DVT, but in fact any general surgical treatment under general anaesthetic can lead to this problem. General medical conditions such as  a heart attack or stroke may also lead to the development of a DVT.

In fact, any period of immobility may lead to the development of a DVT, especially in those who have an inhertied tendancy to clotting, known as a 'thrombophilia'. This is best known following long haul air travel but can also arise after long car and bus journeys. DVT after an extended period of travel is sometimes known as 'travellers' thrombosis'. It is thought that the risk starts after a period of 4 hours of travel and increases as the duration of travel increases.

A DVT should be suspected in someone who has some of the factors mentioned above and develops pain and swelling in the leg. This can range from very mild symptoms to very severe swelling of the leg. Chest symptoms such as shortness of breath and chest pain in someone with a swollen leg may suggest that pulmonary embolism has occurred. A suspected DVT is a medical emergency and requires immediate investigation and treatment. You should seek advice from your doctor if pain and swelling arises in the leg. 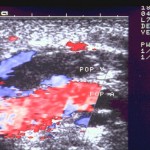 The tests needed to find out if you have a DVT include a blood test and ultrasound imaging as well as clinical examination. In fact, clinical examination is very poor at proving or excluding a DVT and cannot be relied upon to provide a reliable answer. A blood test can be used to detect 'd-dimer' in  the blood. This chemical is relased as blood clots form and can give a indication that a DVT has occurred. However, raised d-dimer levels can occur even when there is no DVT so the results of this test must always be checked by colour duplex ultrasound imaging.  Ultrasound scanning gives images of the veins and measures blood flow. A DVT can readily be seen by an expert in this technique. There is a number of causes of pain and swelling in the leg. If no DVT can be found then other possible reasons for pain in the leg can be sought such as a large bruise or a tear in the muscle.

Once the diagnosis of deep vein thrombosis has been made or is suspected then treatment should be started immediately. The DVT may get a lot worse or a pulmonary embolism may happen if treatment is not given soon enough. The standard treatment is to commence anticoagulation with heparin injections. This drug is given by subcutaneous injections usually given in the abdominal wall. The anticoagulant effect of this drug is fully established within half an hour of injection. It is standard practice to commence anticoagulation with the oral drug warfarin at the same time. This drug takes a week or more to become effective but is useful in the longer term since treatment of a DVT requries anticoagulation for 3 – 12 months depending upon the extent of the thrombosis. Blood tests need to be done regularly to adjust the dose of warfarin. Newer drugs are becoming avaialble which avoid the need for any blood test but these are not in general use at present for the treatment of DVTs.

After a deep vein thrombosis

In general, timely treatment of a DVT will lead to a full recovery with diappearance of the thrombus from the vein and restoration of normal blood flow. It is very unusual for a serious pulmonary embolism to occur once anticoagulant treatment has been established. In some patients veins are permanently damaged by a DVT with scarring, narrowing or permanent blocking of the vein. This can also lead to damage to the non-return valves in the veins permitting blood to flow in the wrong direction, towards the feet. A 'post-thrombotic' sydrome can develop with pain and swelling in the leg leading to damage to the skin at the ankle and ulceration of the leg. It is best to wear medical compression stockings for at least one year after a DVT to rpevent this complication.

In the longer term most people who have suffered a DVT will recover completely. Most will have no further episode but there is a risk of another DVT arising. Anyone who has previously suffered a DVT should take additioinal precautions to prevent a further episode at times of risk such as when undergoing treatment in hosptial or when undertaking long distance travel. Elastic compression stockings and anticoagulant drugs are usually used as preventive measures. Please not that aspirin is NOT an anticoagulant drug and does not prevent DVT. It also has a nubmer of significant adverse features so should not be taken to prevent DVT.