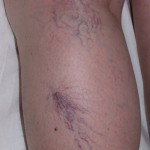 Thread veins are a common problem and occur in about half of adults in western countries. These are very fine dilated veins lying in the skin. They come from normal veins in the skin which grow much bigger than their usual size. They often occur near the ankle, over the inside of the knee and outside of the thigh. Thread veins may occur in the region where a minor injury has caused a bruise. Once this has healed, thread veins stay in its place. Thread veins are also known as spider veins or dermal flares. The tendency to grow them is in part an inherited problem. They may run in some families.  Thread veins may begin during hormonal surges:  at the onset of periods and during pregnancy. In some people they are due to varicose veins but in others thread veins  occur on their own. It is important that patients with thread veins are tested for varicose veins. Treatment of thread veins does not work very well until any varicose veins in the same leg have been removed. Thread veins usually cause minor aching or itching or no symptom at all. Mild to severe pain can be associated with dermal flares as well as fatigue, aching and throbbing. This can quite often be cyclical in women and related to their periods. Such symptoms that present with larger varicose veins do not always disappear following surgery but do diminish with subsequent sclerotherapy treatment for thread veins. The best form of treatment for these small veins is microsclerotherapy. Some doctors use lasers to treat thread veins, but experts in vein problems find that these are not very effective in comparison to injection treatment. Advertisements promoting creams and other methods of treating thread veins often appear in the press. Scientific evidence shows that these do not work at all!